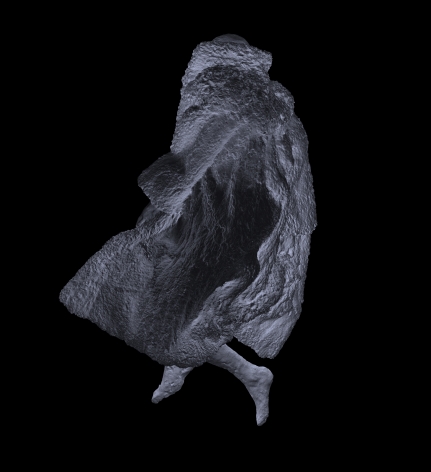 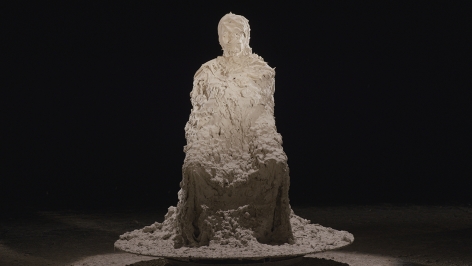 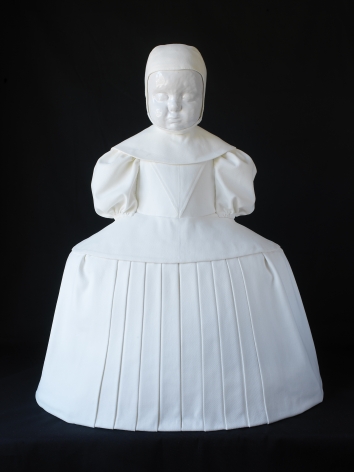 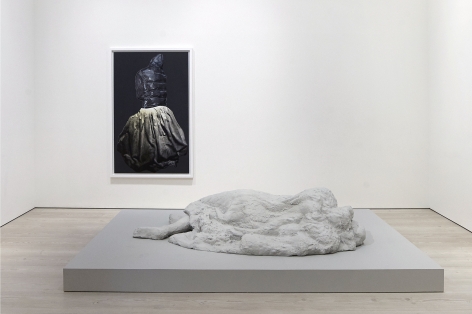 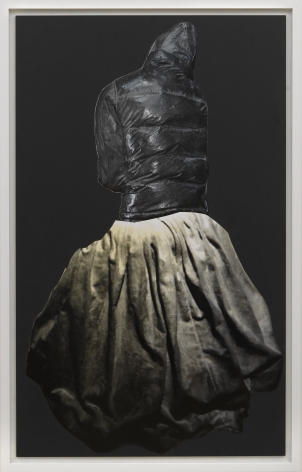 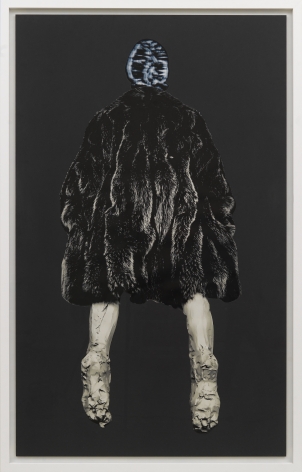 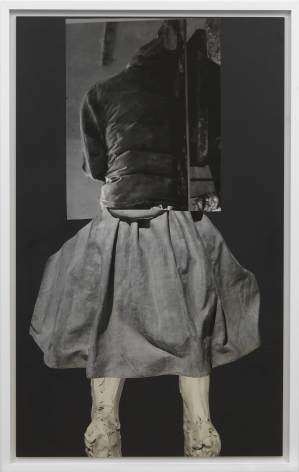 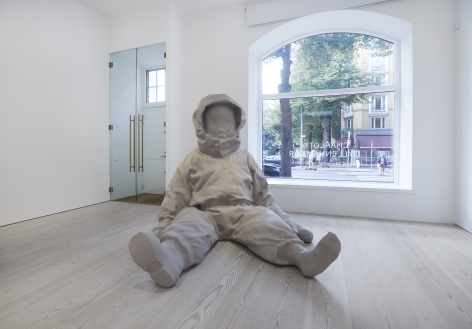 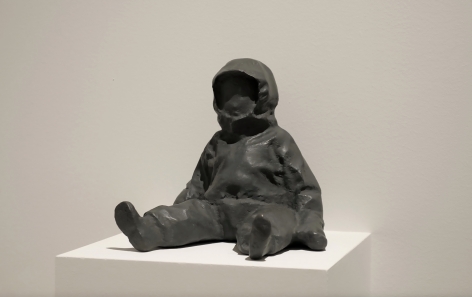 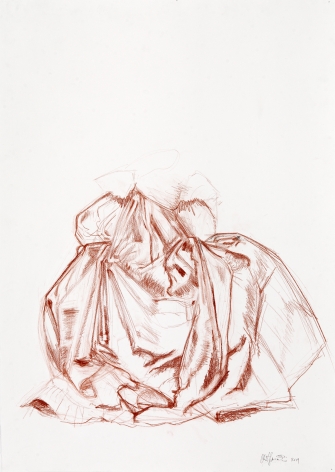 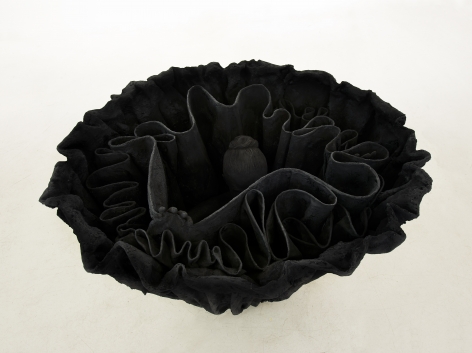 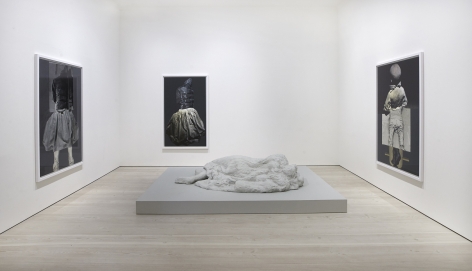 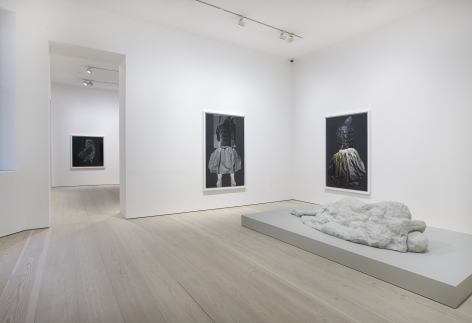 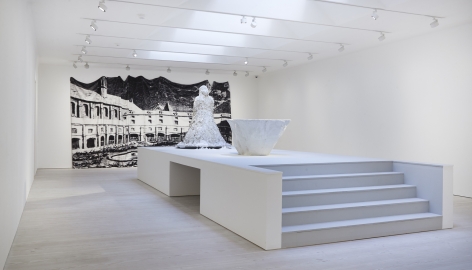 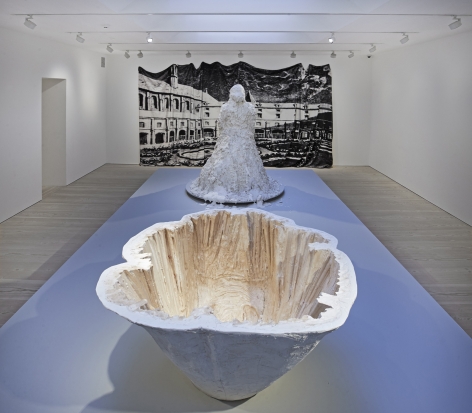 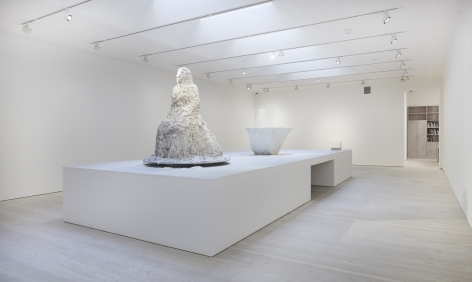 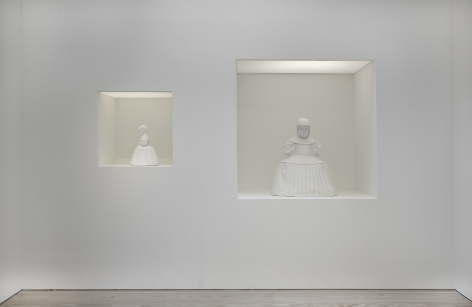 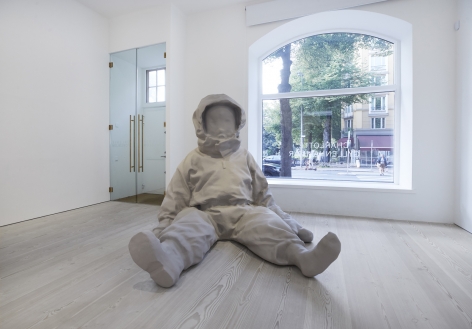 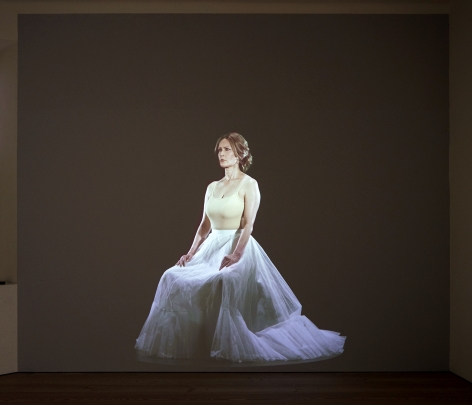 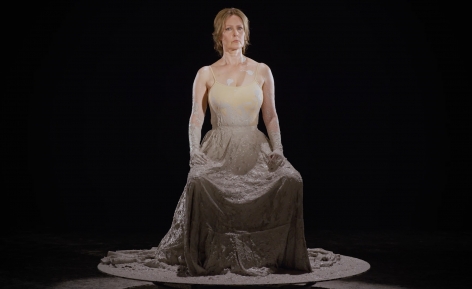 See the film of the exhibition by Josefina Malmegård

What is it that we see in Charlotte Gyllenhammar’s new exhibition? We may think of the film Cast where an undressed, but queenly, woman sits elevated on a platform that slowly rotates clockwise like a chronometer of life. She is in the light but a deep darkness surrounds her.

She is both inside and outside time. Darkly disguised creatures move counter-clockwise around her. They throw heavy lumps of clay at her; slowly she gets covered from her underwear up to her head and face. She is statuesquely unmoved, stoical, while becoming increasingly unrecognizable – matriarchal and disfigured. Finally, she is without any feminine aura and resembles a mountain of white, profane matter.

Charlotte Gyllenhammar has entitled her exhibition kastad/cast. These words evoke divergent meanings. Does the artist describe a rejection, a mudslinging, a ritual stoning, or a funeral? Presumably it is a casted ritual, but it is an ambivalent act. When the last lump of clay is tenderly, or cruelly, slapped onto her face and head, rejection almost turns into a celebration or a coronation.

By then, the subjugated woman is transfigured. Subject as sub jectum. She has become a form – a cast, for the ideal and the sculptural. We may almost see a “de-creation” (in Simone Weil’s word) which is not the opposite of creation, but rather an inverted creation. A simultaneous subtraction and addition. This is what seems to happen – the gestures and violence of rejection become an artistic de-creation.

This exhibition testifies to how boldly, delicately, and consistently Gyllenhammar has expanded the artistic territory through which she has moved since the early 1990’s, and which now, step-by-step, is becoming ever more transparent and poignant. We find the reversal or inversion of the figure of the human condition – ever since the 120-year oak tree hanging upside-down in Drottninggatan in 1993: Die for you –  but I also think of its opposite Sprängning/Bursting, 1991, with torn clothes and human fragments scattered on the floor as after a terrorist attack. We all recall what happened at Drottninggatan in Stockholm on April 7, 2017.

The artworks in this exhibition are newly created, except for Beholder, 2006, a sculpture of a child, and the painfully beautiful sculptures Night Descend and Night Ascend, 2014, where a female body dives down into darkness or ascends from it as if out of a black rose. In kastad/cast– and with all artistic means – Gyllenhammar expands her existential and, in the deepest meaning, political territory; she does this by creating the fall and the deformation as an almighty gravitation that reveals the isolation or solitude of each and every human body. The sculptures mentioned above may be viewed as a bridge into the new exhibition and its much more abrasive transfiguration of this zone of existence.

May we not there discern yet another meaning of the word ‘cast’? I recall Martin Heidegger’s expression ‘Geworfenheit’ (‘Thrownness’) in Sein und Zeit (Being and Time) (1927) where the human condition is seen as one of being thrown in and out of the world. I have, for a long time, seen this dimension in Gyllenhammar’s oeuvre– and it is salient here, too. From the fall of aged wealth in the shape of a fur coat to a little child in rainwear watching the world from a sandbox. The day of wrath or a world of misfortune. The great and controlled serenity of her child sculptures now meet the recumbent, sleeping pilgrims, stranded perhaps on some beach. Are they migrants? Homeless?

The bodies of Gyllenhammar’s work now also become human composites and assemblages. Devious but irretrievable like crime scenes. Dispersed, and seemingly lifeless, garments. De-created. Residual existences. Down and up. The body’s being is draped, sculptured in shifting beautiful and protective clothing – or just in the rough folds of rejection. Thrown or casted.

So, what is it that we see in kastad/cast? One answer among others – that life’s deepest antagonism cannot be fully explained, still they may be created and re-created. That is the mission of art.