Riiko Sakkinen in his studio 2019

In dialogue with Riiko Sakkinen

Riiko Sakkinen, in your latest exhibition, you reflect on the anthropomorphization of the animal kingdom, the way we attribute human features to animals. Where did this idea spring from?

I took my kids to Disneyland, which is like a zoo for anthropomorphized fauna. While we were queueing for the Dumbo carousel, a smiling Mickey Mouse inconspicuously slipped a crumpled-up piece of paper into my hand and asked me to smuggle his message out of the camp. The message contained a manifesto setting out the rights demanded by the Anthropomorphic Animals’ Liberation Front (AALF). I dedicate this exhibition to the activists of the AALF and to all the world’s unnaturally anthropomorphized fauna.

Does the Anthropomorphic Animals’ Liberation Front fight for the same things as animal rights activists?

Human-animal rights activism is inevitably based on an anthropocentric view of the world. All the animal rights treatises I have ever seen were written by humans. That feels the same as only men writing about women’s rights or only whites writing about black rights.

What would you change about this?

If Earth were taken over by aliens, I wouldn’t want to be processed into meatballs, nor would I want to be put in a Martian home to serve as a cuddle toy, much less would I want my face to become the logo of an intergalactic fast-food chain.

But anthropomorphized characters figure abundantly in your art. Many of your works feature animals dressed in human clothing, taking a stand, or expressing a political opinion. Are you criticizing anthropomorphism with its own iconography?

I’m a turbo-realist artist; I show the world exactly as it is. My art features ducks dressed in sailor’s shirts and turtles doing martial arts because the visual world around us is full of them. I don’t portray things that I like or support, but things I deplore and wish to challenge.

Animal portraits were a popular motif favored, especially by the middle classes in western 19th-century art. Today, however, animals are a less popular theme in art. Does the portrayal of cartoon animals somehow differ from realistic animals?

In the hyperreal urban world, there are no real animals, only cannibalistic lizards in chef’s hats barbecuing sausages and lolcat pets distorted into cute, anthropomorphized freaks.

When did animals begin appearing in your work? What was your first animal character, and what intrigues you about them?

My first animal drawing was a Nesquick bunny from 2001 when I was still a student at the Academy of Fine Arts. The drawing – which is now in MoMA’s collection – features a bunny drinking its own urine through a straw. You can make an anthropomorphized animal do crazy, monstrous, and humiliating things without shocking the viewer, at least at first glance. Animals that imitate humans are also easy to draw because they have no real anatomy.

You are currently holding two animal-themed exhibitions at the same time; one at Galerie Forsblom and the other at the Museum of Natural History. Does the message of your works change depending on the context in which they are displayed?

Back in kindergarten, our class went on an excursion to the Museum of Natural History. We were all fascinated and excited to see the animal skeletons. But when we got to the museum, I was suddenly struck by fear. I didn’t dare set foot in the osteological collection. I waited outside on a bench for my friends, who talked about the experience for days afterward. My anthropomorphized animals will be placed on display among the zoological exhibits, forming a thematic unit that will hopefully offer visitors an engagingly strange experience. The viewer can forget all about art and just focus on the content of the works rather than their form.

Video of Riiko Sakkinen talking about his art 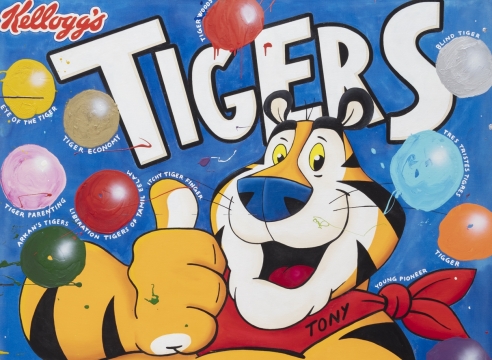