Marjatta Tapiola in her studio.

Visiting Marjatta Tapiola, one of the main protagonists of Finnish Neo-Expressionism, in her mansion in Sysmä, a two-hour drive from Helsinki, takes you back in time. From her studio in a 400-year-old threshing house, far removed from the outside world, Marjatta creates her monumental paintings that recount life’s cruelty and carnal indulgences and, more recently, increasingly take their inspiration from biblical themes. Despite their airy character and fervent choice of color, Tapiola infuses her contemporary works with a sense of antiquity with the twists of her brush and masterful command of line.

Marjatta, your studio appears pretty bleak. All we can see is white walls and empty canvases.

I just finished an exhibition in Helsinki. Infact it was just taken down last Sunday night. The response to it was good, but once it was all over, I felt extremely lonely and dead tired.

Your first exhibition was in 1977, followed by shows approximately every other year. So you must have found a certain routine of working?

The time before an exhibition is still a dreadful time for me. I work straight up to the exhibition. This time, I even forgot one painting that I had completed the last minute in the studio, it was still soaking wet when it was finally hung in the gallery. Luckily, I only had two nights filled with nightmares right before the exhibition. (laughs) When I was young, I often had them for an entire week. Nowadays, I do have my routine. I cut my hair, clean my face, put on new clothes. I also buy myself new heels. It’s a total revamping! (laughs) But the excitement is tremendous every time.

This time you touched new themes in your art. Did this affect the way you felt about presenting it in public?

I’m so terribly lazy. I would never paint anything without it having a tremendous meaning for myself. I would never just produce paintings, my paintings are filled with grand, holy ideas.

How would you describe the evolution of your artistic interests?

In the early days – when you weren’t even born – I was fascinated with the human skull. One summer I took a bunch of skull paintings to the Taidekeskus Salmela art center. I was standing there completely alone. No one wanted to look at my paintings. But I continued painting them for a few years. You stick with one subject and live with it for a while. Then I shifted from painting the living to painting the dead. One piece in particular, where a girl embraces a man who had hung himself was hard to paint. I got so depressed about the things people do that I turned away from that to painting dead animals instead. To me they felt more human than anything that humans were capable of doing. 30 years ago, I found the skull of a deer my father had shot in the garden. Since then, I’ve received many skulls as gifts. I have skulls from a horse, a pig, a cow, a seal, to name just a few. 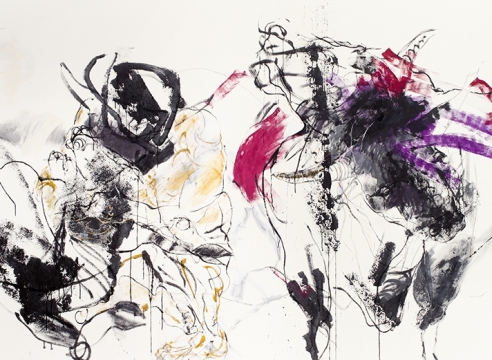