In the studio: Johannes Hägglund
Interview with Collectors Agenda

Swedish painter Johannes Hägglund belongs to a fortunate few within his generation of artists who have had the good fortune to be represented by a reputable gallery while still at art school. While this was once considered taboo for a gallery, strictures have been slowly loosening in the local art scene, and by the time that Johannes Hägglund presents his MFA graduate exhibition, he will already have shown two solo exhibitions with Galerie Forsblom in both Stockholm and Helsinki. In this interview, Johannes elaborates on how decisions and choices in his practice relate to the continuous striving to evolve his craft as a painter. While neither a purely abstract nor figurative painter, the artist says he is less interested in the motif than in the associated painterly process.

How long ago did you start making art?
As a child in the first years of school; I was in Montessori educational programs which meant we got to develop our creativity through painting and crafts-related activity. In hindsight, I realize that mirrors exactly what I’m doing today, although there were years in between where there were gaps in this sort of practice. But looking back, I think I was already being shaped by this while very young.

Do you remember what you might identify as your first substantial “artwork”?
Not exactly. I never had an idea as a child that I wanted to become an artist per se or even that I was making art for that matter. There was no contact with what you could call an art world or even the knowledge of what a gallery was. But what always existed from early on was a need to create with my hands.

Did you ever consider the possibility of an alternative profession?
There was never anything else in the picture as I remember. I think rather that I’ve both consciously and subconsciously made decisions that gradually put me onto this path, for instance by choosing an aesthetical program back at high school.

You’re currently pursuing and completing your MFA at the very prestigious Royal Institute of Art in Stockholm where we are conducting this interview. What has been your experience here?
This great allure of attending an art school like this, I think is something that exists primarily prior to getting there. I think some of the ideas and expectations one has in mind in terms of a grandeur of sorts become more realistic in due time while studying. Being here does of course open some doors and you might have eyes on you from the outside to a greater extent than elsewhere.

Your studio is so neatly organized. Everything looks so tidy and you’ve even built your own wooden storage and archival cabinets inside which look very intricate to me. I imagine it’s a great benefit to be skillful and self-sufficient this way.
I have a great wish to be independent and to do as much as possible myself and not to be reliant on others for my direct needs any more than is necessary. I enjoy making my own frames and I made some of the furniture you see in the studio. I believe this relates to my wish to facilitate the creative process and allowing it to be smooth and free from time and financial constraints at least as far as others are concerned. I really do enjoy handiwork, to me it is fun and in fact it has also proven to be a financial resource in so far as helping others with their tasks.

In your early work, plants and vegetation were both very evident and vivid motifs, where did that interest come from?
I don’t think there was a particular intention in those works to convey such an interest, it came down to my wanting to channel and reflect the energy generated by me in the process of painting. As a very structured and controlled person, I attempt to find systems and structures to guide my painting. I am neither merely a figurative nor an abstract painter, but I want something tangible from which to depart, and in that I strive to arrive at a certain realm of imagery. I was doing a lot of analogue photography a few years, and began painting lumber that I had photographed. However, I wasn’t happy with the way that my painting was restricted to straight lines rather than flowing, more organic shapes. A friend of mine had found a box of old photographic slides of images from a banana plantation in Gran Canaria; I liked the organic shapes informed by the images which allowed me to branch out and develop my painting.

Are there any common misconceptions about your work that you would like to address?
I don’t think there’s anything in particular that I’m aware of. But something that does come to mind is this thing about people often wanting to see “something” in painting. A wish for the depictive to appear with a certain immediacy, which I totally understand but which can be limiting. For me it’s actually less about what is depicted and more about the painting itself. I’m more interested in the brush strokes on the canvas and with the colors than the final motif itself.

You belong among the young emerging artists in Sweden who’ve received great exposure and visibility considerably early and are even, while still at art school, represented by a major gallery, Galerie Forsblom. What sort of pressure has this placed on you?
Because school is such an open place to grow and develop without consideration of the outside world, I may have been a little worried that all this might infringe on the freedom one anticipates enjoying at this stage, although I tend to feel that it hasn’t. It is a reality however, that exposure to and contact with the commercial art world means that considerations which ought not to be, are brought into your studio. But I do feel very relaxed for the present. 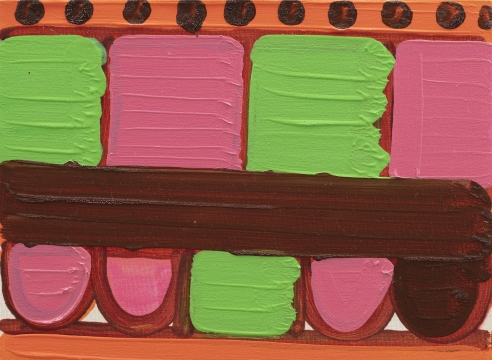