IN THE STUDIO: INES STELLA

Street artist Ines Stella, born in Helsinki and raised both there and in New York City, has emerged in the gallery business as part of a new generation of Finnish artists. At the age of 16 she put up small examples of street art. After senior high school she found herself in New Zealand where she met two tattoo artists who taught her both how to use a tattoo machine and the application of paint using aerosol spray cans. In the summer of 2017, Helsinki based gallerist Kaj Forsblom was impressed by examples of her work that he inadvertently encountered on the street. What happened next made all the difference to her in terms of the artist she is today.

Ines, you started as a street artist in the public space. Your path to becoming an artist represented by a major gallery came about, well, quite literally on the street. Can you recount for us how this occurred?
I was painting an electricity distribution box on Korkeavuorenkatu in downtown Helsinki (something many street artists in collaboration with the city have done for years). On the same day, Kaj Forsblom (founder of Galerie Forsblom, an art gallery in Helsinki) walked past and stopped. “Hey, that looks pretty cool. You should come to the gallery one day,” he said and gave me his card. At this point, I had been painting for ten hours already since the early morning. I read the gallery name, but played it cool. I said I would come by the next week. The next day he drove by and found me in the same spot and wound his car window down. “Do you remember me?,” he asked and simply said: “See you at the gallery next week.” It was a crazy coincidence.

So then you had your first meeting with a gallery, how was that?
I told them I wanted to transform the gallery space. For me street art has always been about creating a wow effect, transforming the urban space and being able to make a statement. The public space is highly regulated. Stretching the rules and questioning norms is what I like to do.

Did taking street art indoors feel like entering unfamiliar territory?
The gallery space is very different from the street space. You can never bring street art into the gallery. The white walls did feel a bit intimidating in the beginning.
I asked if I would be allowed to paint on the walls, and Kaj Forsblom said he had never before allowed anyone to paint on the walls, so I asked if I could be the exception. 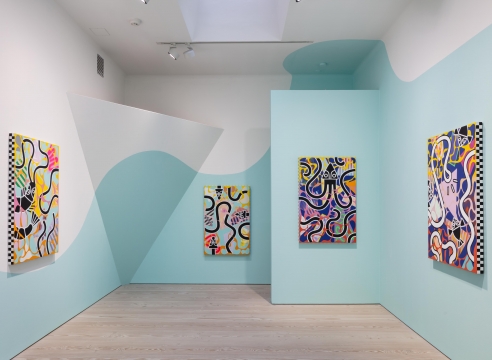