You rank among Finland’s best-known contemporary artists, and you have been enriching the Finnish art scene since 1989 with your lyrical paintings of simple subjects – objects – which your render with immaculate attention to detail. Many of your paintings in fact have the title object.

1. What is the object of your paintings and what do you wish to express through it?

I have always regarded titles as having an important function. I’m interested in the dialogue between the verbalized and the visualized, the third dimension that springs up between them. Words evoke certain ideas and feelings, while an image/painting elicits different responses. Ideally the two joined can give birth to something exciting. An image/painting and its title each has its own independent function, both of equal importance.

At some point I noticed myself wanting to focus more attention on the visual side, so I gave up naming my paintings. I didn’t want to use the standard ‘Untitled’, so I came up with Object instead. That’s ultimately what a painting is – an object placed in front of the viewer.

Perhaps I don’t really think of myself as a painter in the strict sense of the word. Of course I’m interested in the challenges presented by the two-dimensional surface and how quickly it begins to convey a sense of the bottomless depth on the other side, but in the end I’m more interested in the conceptual side of painting. For me painting represents both an attempt to understand what painting and the painted surface are all about, as well as an oblique means of contemplating the great unknown in front of me, the ever-changing Other.

2. You once said that painting is a meditative process for you. Can you elaborate on what this means to you?

My earlier works on wood have a meditative quality because drawing on wood in pencil is a very time-consuming process. These works are instilled with a particular sense of presence because I spent so long simply focusing on the surface and the movement of the pencil, losing sense of what I was actually portraying. I didn’t want my personal handprint to be too visible. I wanted only to convey an experience.

3. For many years you painted on wood, but now you have gone back to painting on canvas. How has this switch impacted your work?

Switching from wood to canvas completely changed my style. It felt like I rediscovered painting and unearthed a whole new side of myself. I had always thought that I wasn’t cut out for an expressive style and clearly readable brushstrokes – others could, but not me.  When I finally plucked up the courage to try, I instantly noticed how natural it felt. It all became about the traces of the brush, which I consciously left visible, and the physical presence of the Author/Other – the touch. It became about speaking, not in words, but actions. It requires absolute presence and concentration to leave traces of actions that come across as authentic, conscious and real. I feel like I’m turning directly to face the viewer and trying to be as open as I can.

After switching from wood to canvas, I also enlarged the scale of my paintings so that the viewer is more completely enfolded in their embrace.

Your latest paintings seem new both in their color scheme and their visual abundance. Could you tell us a little more about what inspired them and how they differ from your previous work?

I’m constantly searching for new approaches and hoping to gain fresh insights on what I’m doing. The collection I painted for the CHART Art Fair picks up on the theme and style of my previous exhibition, but this time I was bolder than before. I was struck by a compulsion to paint in bright, forceful colors. My new paintings have a greater sense of immediacy; I feel they’re more sensual than my previous works.

4. You painted a series of transparent drinking glasses for your 2015 exhibition at Galerie Forsblom. This is a continuing thematic strand in your oeuvre. Do glasses have special significance for you?

A glass, in my eyes, is a clear metaphor for painting: it is an “object used for or capable of holding”. A glass – like a painting – is a receptacle or container into which the viewer pours their gaze and interpretation.

A painting ultimately represents exactly what it is. The canvas is a receptacle for the image/painting. I try to bring the represented object as close as possible, both spatially and mentally, which gradually begins to erode its temporal layers and sense of distance.

A glass or a painting exists and yet does not, for both are transparent: they don’t exist because you can see through them, yet they exist because they throw back a reflection of their surroundings. Or perhaps a glass exists in order to contain a cosmic void within itself; it is “any space between the arms in which something is held”.

Galerie Forsblom is pleased to present the latest paintings by Susanne Gottberg (b. 1964) at CHART Art Fair in Copenhagen, August 26–28, 2016. 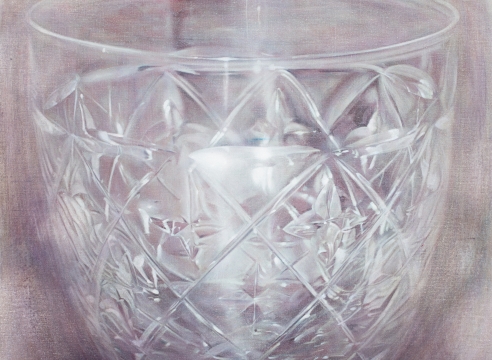